Have you started shopping yet?
There's nothing in your cart...
Product is not available in this quantity.
February 8, 2017

I recently saw a meme that featured a picture of Donald Trump holding a executive order that said, “all cannabis is legal”. The photoshopped photo directed me to

holding a executive order that said, “all cannabis is legal”. The photoshopped photo directed me to click ‘like’ if I would support Trump in legalizing hemp. This is not an uncommon thing to see, a politically naïve (it takes more than an executive order to legalize hemp) meme about hemp legalization. Normally, I wouldn’t bat an eye at such a meme, I might even click ‘like’. But these aren’t normal times.

These first few weeks of a Trump administration has been a whirl for me. I know that he’s just doing what he promised (which is, after all, a strange thing for a politician to do), but somehow it didn’t seem real until now. Maybe it was my ‘liberal bubble,’ but somehow I didn’t expect things to move this fast, for us to be this divided. I wasn’t ready for our racism to be worn so proudly, so arrogantly. And this is why the meme shocked me. It was so…normal. It acted as if our support of Trump, even as he signs an unconstitutional migrant ban, depends solely on whether or not he supports our industry. And it got me thinking: are we a single issue movement?

The modern hemp movement in the United States is made up from a diverse crowd. I have met so many people, from surfers to family farmers, from environmentalist activists to small business owners. I have seen us unite around enormous projects: healing the soil, inventing new technologies, educating ourselves and the public about the power of hemp. In uniting around hemp we have become rebels together, pitched against against unjust laws and outdated social norms, so it’s no surprise that we resemble a band of eccentric, radically accepting people.

But, as most of us know, hemp wasn’t always on the outside. It was once grown by the heads of state, was once one of our major crops in the southeast and midwest, was once promoted for the war effort. So, what happens if we become mainstream again? What would we do if Trump suddenly put hemp at the forefront of his push to “make America great again? If we were no longer the underdog, would we unravel, or do we have other values to unite us?

Of course, with Jeff Sessions our likely attorney general, and with Trump’s previously tepid response to cannabis legalization, it’s not likely that hemp will escape the heavy, restrictive, and bureaucratic hand of the state any time soon. But this doesn’t make these questions any less urgent. Now, more than ever before, is the time for us to declare our values as an industry.

A time to act.

Major companies, from Starbucks to Netflix, have voiced their clear opposition to Trump’s recent executive order to ban immigrants from seven majority muslim countries. While these could be cynical marketing ploys, the fact remains: there is a terrifying concentration of power in the hands of people who would like to see an United States that is based in fear of the other, in exclusion, isolation, religious conservatism and intolerance. Countering this power will take a broad coalition of people, and business cannot just sit on the sidelines.

Is our bottom line just financial, or do we also have a moral bottom line? Which do we value more, the green of a dollar bill or the green of a vibrant planet? We talk a good game about hemp being a socially and environmentally friendly plant, but where do we stand when push comes to shove? If we stand for sustainability, radical inclusiveness and healing the planet, then the last few weeks have given us plenty to be concerned about.

Hempy’s has been in the game for 20 years. We are known for our U.S. manufactured goods, for our sustainable apparel and our roots in surfer culture. We know well that our strength is not in our business savvy, but in our conscience. We know that we are stronger when we work together, when we celebrate diversity rather than fear it. We hope that others in the industry will follow us in condemning not just the parts of this administration’s agenda that threaten our industry, but every bit of rhetoric and policy that breeds fear, division and discrimination.

This is not a partisan issue. We should have been much more vocal during the previous administration when our personal rights were being eroded and and executive powers were continually expanded. For many of us, it was too easy to stand by the sidelines. But now we know these are not times to be silent, we all must be most vocal about things which threaten our core values: equality, environmental stewardship, democracy, diversity, and freedom.

I definitely don’t have all of the answers.  I don’t know how we can be effective in making change. We don’t have a ton of financial or political power. I don’t know exactly what the hemp industry’s role could be in fighting against racism and government overreach. But I do think all effective action begins with a conversation, which is my intention here, to break the silence. We aren’t part of the establishment, we don’t have all of the answers, but I think this is part of our strength. We can unite with the other underdogs, the other groups of people targeted by the DEA, the other people trying to heal the soil, the other folks trying to reform the medical industry, and try to figure out answers together. We can keep doing what we have always done: seek out truth in the face of ignorance, look for love in the face of hate, and, most of all, find ways to act in the face of injustice. 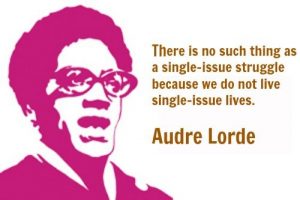